In my case, shaving at least 3 times each week and sometimes more, my razor blade is still sharp at the end of a year shaving. So, this year my 4 pack of blades is gone and I have to buy a new 4 pk. TV ads say my favorite popular razor blades cost less now. We will see.

When you use The BladeKeeper® you can use your favorite razor and blade cartridge. Some of the folk’s that were invited into our Test Group had mentioned they had stopped buying razor cartridges for their favorite razor because of cost and had started buying bags of disposable razors that lasted 2 or maybe 3 shaves and then throw it away and get a new one out of the bag. We were pleased to hear from these Testers, that after using The BladeKeeper® they were receiving 6 to 12 shaves from these throw away razors. This result allowed them to go back to buying cartridges for their favorite razor because they felt it would last much longer and would be cost effective. They all were pleasantly pleased with how long their blades lasted using The BladeKeeper®.

A note to all the people who have been following information about the release to the public of The BladeKeeper®. We are getting closer! The Manufacturing Design changes that had to be made have been completed. Everything is now ready for Plastic Manufacturer to go into production on the Protective Case and plastic parts needed to produce The BladeKeeper® in quantities for the public.

At this time a new video is in production, (Maestro The Magician Extraordinaire), to help introduce The BladeKeeper® to the public. After this is completed, it is planned to bring in professional marketing services before The BladeKeeper® is introduced on Kickstarter.

Look for the latest updates on The BladeKeeper® on MichaelThought Magazine as this is the inventors web site and news is posted here first. Thanks Again for everyone’s interest in The BladeKeeper® and we are very sure that when you get your BladeKeeper®, you too will be very satisfied and also save money from that day forward. 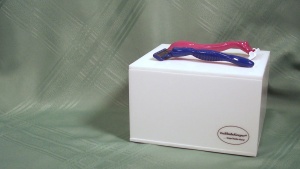