You are at:Home»Along The Road Of Life»Peaceful Fishing Trip – Not

Looking forward to the sound of the waves splashing against the bridge pilings with a light breeze of 10 to 14 mph from West South West, should be good fishing. Scheduled special time with the Mrs. to meet me at nice fishing spot I’d been to before, and it would be good for some video shots of the bay and surrounding area. So pretty!

Got there early, as I hoped I would, and yes I did know they were building a new bridge beside the existing bridge between two large communities on this history highway along the Gulf Coast of Florida. And yes, I expected lots of activity  in the area, but, what I didn’t expect was the pile driver. A really big pile driver, like I’d never heard before. Like this thing was doing a really good job of driving that pile into the Earth.

I decided almost immediately, if not before that, my mind could not take this pounding for any extended length of time …fishing would have to take place at a different favorite fishing hole than this one, but I had time to shoot some video of the bay and area and it’s a beautiful park at the entrance to the fishing bridge. And as often is the case here, there was a bay vulture walking the sidewalk and checking out the fishermen that were there. Would make good video.

As I walked to the truck to retrieve my camera and tripod, the pile driver was delivering a bang about every 3 or 4 seconds, and I decided about another 5 or 10 minutes of this would be enough to last me for a long time. I would be fishing somewhere else for sure, even if it looked like a fishermen was catching something! I had walked through the 200 ton press department at Beech Aircraft back in the ‘70’s and those things shook the floor. I worked as an avionic tech in another area where we didn’t hear the presses work. This pile driver was pounding a lot harder and a lot louder. My what a picture, that I’m briefly a part of. Got to give kudos to the folk’s that build these huge bridges. Tough folk’s.

Got my video shots I wanted and the bay vulture got in the pictures right on cue, so, back to the truck quickly, put equipment away, call the Mrs. and divert her to the next choice. All worked out well and she was waiting for me in the parking area of the next fishing hole, close to home. It would provide some nice video and some good still shots. I did not mention this was a peaceful fishing spot, because of I-10 being located about two football fields South of the waters’ edge. But, it was on the way home and easy for the Mrs to get to, it had fish, usually, and best of all today, it had No Pile Driver. It would do fine.

Well, I got some video shots and some nice stills, the fishing was slow, except for the bait stealers eating the pieces of shrimp without getting caught. Crabs, always there are crabs it seems. It’s a quarter til 6pm now, and the S.W. breeze of 10 to 14mph has failed to decrease, as forecast, and the air temp has fallen from 75 to only 70F now, and the Mrs. is commenting about the wind chill is a little biting now, as well as are some very small flying insects. Is it getting about time to go, maybe? 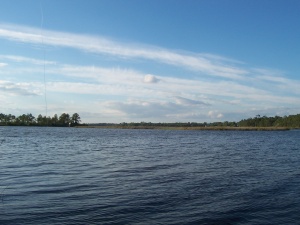 Not A Peaceful Fishing Hole April 2018

Sure it is, fishing’s slow. They had their chance to get caught and they missed it. And besides, when a Mr. is lucky enough to have a Mrs. that will go with them to the fishing hole once in a while, when their ready to go to the house, take the hint, pack it up and feel blessed you had their company this time.