You are at:Home»A / A+ Products»A Bottle Of Feel Good For Your Motor

Article – A Bottle Of Feel Good For Your motor

Many years ago I tried Lucas Heavy Duty Oil Stabilizer for the first time. Been adding it to my oil ever since. Worth the money for sure. The first time it made a real impression on me, was when I lost a water pump on a pickup in heavy traffic with no place to pull over quickly. When the bell went off and the red light came on on the dash, I knew then, “we have a problem Houston!”

As you start maneuvering over to the right lane hoping for a turn off as soon as possible, you just know that poor motor is not happy and is exhibiting that heart sinking feeling of starting to loose power and not wanting to stay running, wanting very badly to just die right there on asphalt.

Finally, a place to get off the road, and boy is that motor struggling to stay alive, but she got to a safe place to shut off and let her cool down. While waiting for the tow truck to come, you turn on the key and check the temp gauge and see if she’s cooled down some now. I’m convinced Lucas Heavy Duty Oil Stabilizer made all the difference in the world. While still waiting on the tow truck, the temp gauge went down to mid gauge and I had to try to start her up and see how bad the damage was. So pleasantly surprised to not see blue oil smoke coming out of the exhaust pipe.

I was very afraid I would see the blue smoke screen out the back from destroyed piston rings like I had seen one time many years ago. Same scenario, water pump goes out and motor temp goes up and engine over haul or replacement becomes the next step. That time just had to make it to the drive way, at whatever cost. It was back in the mid 1970’s, the car was an older black Chrysler Crown Imperial, the temperature outside was in the ‘20’s, snow is blowing and there are young children in the car. Car is going to make to the drive way one way or the other. It did, but, when I started it the next day, it was a sad scene of thick blue smoke out the back. End of that motor.

Not the case with the pickup truck with Lucas Heavy Duty Oil Stabilizer in the oil at oil change. While she did use some oil between oil changes after that overheating experience, but no smoke out the back going down the road or at stop lights.

I had wondered about using Lucas Heavy Duty Oil Stabilizer in new or newer motors and then a friend told me a comment he heard in conversation with a charter boat Captain in our area. The Captain said they always add Lucas Oil Stabilizer when they get a new motor, whether a replacement motor or a whole new boat.

He said, “it raised the rpm reading, meaning more speed, and fuel mileage improved”. Sounds like a winner to me! Glad I found this product years ago. 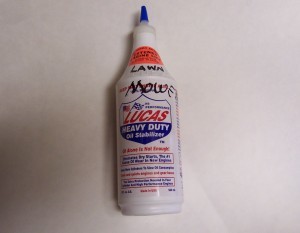