Article – The Creation Of Maestro The Magician Extraordinaire

Sometimes you need a Magician, sometimes you don’t. Turns out the script for the next video to be produced called for a Magician. The next video in production today, is a special presentation for our funding project for The BladeKeeper®. What we needed was a Magician Extraordinaire, who could magically make razor blades last 4 times longer than normal.

He is now practicing his magic show and looks quite stunning in that red lined cape and black top hat. Soon, “all quiet on the set” will be called and the cameras will begin to record the action as this Magician Extraordinaire begins his Magic Show and his part of introducing the world to The BladeKeeper®.

The last thing Maestro expected, was for his act to be upstaged by an old man in a white lab coat who has a new invention. But, that’s what happens and in the end Maestro The Magician decides he wants his own BladeKeeper® because it’s easier than magic!

Stay tuned for the first airing of this Magic Show here on MichaelThought Magazine. It is expected that professional services will be brought in on the funding project for The BladeKeeper®, so, The Mrs And I Productions department will most likely be upstage and out done, just like Maestro, but that’s fine by us if it’s better. 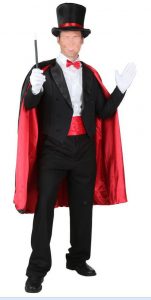