You are at:Home»Entertainment»Christmas Tree Light Show 2017

Well see, Old CowBoy Writer™ wanted a Christmas Tree …in the backyard. Boy did he get one! The Star on Top is at 10ft and there is over 3,800 Mini Lights on this beautiful Frazer Fir.

See, Old CowBoy Writer™ had this idea to entertain the folks with a Christmas Tree Light Show. Since “Entertainment” is in the title of the MichaelThought Magazine, he felt, while he was the “Volunteer Spokesperson” for The BladeKeeper®, he wanted to try his hand at the “Entertainment Thing.”

So, about a month out from Christmas Day, work started on acquiring the first of many, many strings of lights. Start early, get done early, that was Old CowBoy Writer’s™ plan, hate to be rushed to finish something. Ya, right! It was at this time, that it was discovered if you want all Yellow Lights in a string of 300 lights, you’re going to buy many extra strings and “pluck and push”, (meaning remove from one string and place in the “Yellow” strings), a lot of little light bulbs. Hours and hours of plucking and pushing bulbs. Old CW had not planned on this kind of time consuming problem at the outset of the project, but, it is what it is, so truck on and get it done. Right.

After all the strings of lights are working, lots of 12ft and 6ft extension cords are needed. And then there are the plugin strips and of course many light switches and new heavy duty long extension cords. Of course, have to get many ornaments, needed some gold garland, maybe some real big ornaments too. And then there’s the pretty star for the top. It’s all coming together, slowly but surely.

That’s when the “Big/Small Problem” was encountered. The beautiful Balsam Fir Tree had been obtained with a week to go before Christmas and the light string placement according to the design layout sheet had begun on the 7ft tall fir tree. With only 1500 lights installed, The Tree Was Full! Old CW had a major problem on his hands. Because of lack of experience and “Big Light Show Design”, the size of The Tree had been severely under estimated, and Old CW needed a much bigger tree! Right Away, Please! Ya, right …It’s two days before the big light show is scheduled for the video shoot and now you have to get another tree and start from scratch again. Oh my …

Well, Old CowBoy Writer™ can be a very determined man at times, and this was definitely one of those times! So, starting over again, on a beautiful New Tree. A 10ft Frazer Fir is a Big Christmas Tree and would definitely hold all the light strings. Hours and hours later, (total man hours on the project were not allow to be calculated or even estimated, as this could completely eliminate the possibility of a 2018 Light Show due to knowing how long it real takes to do it!) and uncounted trips up and down the 8ft ladder, The Tree was looking good!

Now, add 50 or 60 Ornaments and 6 or 8 of the real big ornaments, add some gold garland. Oh ya, looking good. Oh and that Star On Top is extra cool! So pretty!

So, a project that was started 4 weeks early, was now ready for the video shoot! Of course, it has to be mentioned that the cameras went live at 10 pm at night on Christmas Eve and shot video footage for one hour. A whole day and 5 hours behind schedule, and at this time an unknown amount of money spent over project budget, The Christmas Tree Light Show 2017 OCW was in the computer and ready for the many hours editing video. What a project it has been. After a late night shooting the video Christmas Eve, more than 10 hours of studio editing the video on Christmas Day, at about 8 pm Christmas night, the Light Show 2017 was promoted to the USA and Canada, to show for a week.

This week’s work continues on the Light Show 2017 project with the editing of a longer version of the show, which includes the original 7ft Balsam Fir showing of a “Fisherman’s Version”, which includes lighted fishing bobbers and fishing floats. This tree all so does an “All Pink Tree” version. So, more hours editing and “The Show Is Done!”

While Old CowBoy Writer™ is old and is showing some signs of exhaustion, that sure is One Pretty Christmas Tree! The Folks on Facebook are enjoying the show and when Old CW looks out the kitchen window to the backyard, he has a site that not many folks have … a beautiful 10ft tall Christmas Tree, with pretty lights for whatever color you’re in the mood for!  All 3,800 lights!

Happy New Year Everyone! May 2018 be the best year yet for you and yours! Enjoy! 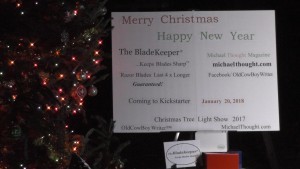 The BladeKeeper® on Kickstarter January 20, 2018