You are at:Home»Entertainment»Old CowBoy Writer™ – Show 1A Boost

“The BladeKeeper’s® Path To The People, ‘Cause They Deserve It!”

Old CowBoy Writer™ released his first Show today on Facebook, Show 1A Boost is the second promotion on Facebook. The entire process of making and promoting video productions has been educational and interesting, even trying at times, but the process goes on. Old CowBoy Writer’s™ volunteered effort to “Bring The BladeKeeper® To The People, ‘Cause They Deserve It!”, has just begun. While the learning curve on video production & editing, marketing success on Facebook promotions, and of course, desktop publishing which is where were at right now, here on MichaelThought Magazine on WordPress Dot Org, Old CowBoy Writer™ is a tenacious old timer and when he volunteers to help out on a project, he usually stays on task like a good dog herding cattle ’til the job is done. Here is video of our first show.

So, at this point along “The Path”, Old CowBoy Writer™ would like to say “Thank You!” to the 594 folks out of 836 that were presented our first video on Facebook, Special Announcement – Introduction Of Old CowBoy Writer™, that actually clicked on to view the video. We asked folks to read words on the screen, kind of Burma Shave Road Signs Style. Of course because there was only back ground music and no speaking, some people wanted to know what Old CowBoy Writer™ was reading and saying. Those are scenes from an up coming show, called “Casual Conversation And Coffee With Old CowBoy Writer™. He likes to talk about The BladeKeeper® and he’s known to shoot from the hip and call a horse, a horse, ’cause, he is from out west you know, North of Dodge City Kansas, ’bout 90 miles as the Crow Fly’s. He also likes to tell stories, so some “Round The Campfire With Old CowBoy Writer™ Shows” are planned as entertainment on MichaelThought Magazine™. Should be interesting, educational, will probably be frustrating and full filling all in the same experience of volunteering for this project on MichaelThought Magazine™, but it’s worth it to help “Bring The BladeKeeper® To The People, ‘Cause They Deserve It!” 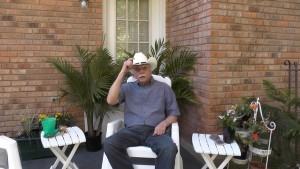